The undeniable appeal of this conference is to offer in a convivial setting a fruitful meeting between academics and professionals working for cities, regions and countries all over the world, interested in the implementation of place branding and marketing concepts, in order to attract and retain wealth : residents, visitors, investors, companies, talents, events etc.

Meeting delegates there, you realize that behind each place brand, there’re dedicated individuals, men and women from various parts of the world, who strive (but also compete !) to mobilize all the energies and resources available to value their place and its people. What a tough but rewarding vocation !

Here are some of the key ideas (not exhaustive list) that were raised during the CNP 2016 conference :

The high-performance destination syndrome : New York and Amsterdam have outlined the rocketing, nearly out-of-control growth of their visitor attractiveness in recent years, evidencing the undeniable success of their marketing strategies. Nevertheless, this situation has entailed some undesirable effects : overcrowded city hearts due to mass tourism, nurturing tensions between visitors and locals (ref. photo showing a wall in Amsterdam where one can read : "refugees welcome, tourists go home!" and this video). To tackle these rising hostilities, the two cities have undertaken approaches fairly similar in terms of branding and marketing : the New York city inhabitant is strongly encouraged to get involved in the tourism development of his neighborhood through training and a dedicated program #Seeyourcity, an app developed in partnership with American Express. Amsterdam, wants to focus on preserving the 'soul of the city', cornerstone of its strategy targeting key stakeholder groups (residents, tourists, and business circles). With "Discover Your Amsterdam", the Amsterdam marketing board wants to turn more peripheral neighborhoods into destinations, following a logic of sub-brand development. This includes new media and visual content showcasing the unique character of each of Amsterdam's districts (shopping, cultural festival, restaurants, architecture etc.). Managing place brand reputation crises : a truly hot topic which was discussed through the cases of Iceland and mostly Nepal, two countries that have managed to reshape their image, turning a natural catastrophe, such as a volcanic eruption or a earthquake, into an event forging the character of the place. For crises are seen as unexpected opportunities for some places to demonstrate their resilience, sense of anticipation, but also their creativity, their ability to tell a story that arouses curiosity and sympathy, especially for the media. Nepal, following the earthquake, deployed an effective strategy of influence on social media (success of the I am in Nepal Now campaign), highlighting the tremendous dynamism of local cultural life In the aftermath of the disaster. As a result of its efforts, Nepal was voted "World Best Value Destination 2017". The presentation of the Digital Country Index by Bloom Consulting, a powerful monitoring tool of online country brand appeal, also stressed the importance of a place's reputation as an essential asset particularly vulnerable to external events : How brand USA has been affected by the electoral successes of D. Trump and at the same time benefited the brand Canada ? how the image of Brazil was affected by the social disorders that punctuated the World Cup in 2014 and the Olympic Games in 2016.

The power of language : it might be relevant to distinguish between soft and hard place branding narratives. Some places, mostly countries, have sought to make their branding message as audible as possible, to maximize stakeholder support. Luxembourg's, whose nation-branding approach was met with strong local support, made the case for the idea of co-creating a collective "signature" rather than a "logo". Britain, which annually wins a best branding award for its Britain is Great campaign, demonstrated the virtues of its umbrella country brand model (smart use of the word GREAT). Never mind the Brexit, the successful communication apparatus has become the spearhead of Great Britain's promotion abroad (direct and indirect benefits valued at nearly € 2.2 billion, support of nearly € 94 million and patronage of influent people such as the royal family , David Beckham, etc.). It has served as a major international gateway for UK cities and regions, and has generated coherence across various communication channels for activities and sectors that embody British excellence. For the campaign's manager, the choice of the right words matters : "we do not talk about Place Branding or Nation Branding, we talk about a program to create jobs and economic growth". More on a city-level, Berlin's systemic approach of place branding was presented. Behind Berlin's undeniable city brand success, the leadership of Berlin Partner, a remarkable public-private partnership (membership of more than 270 companies and scientific institutions) which manages the be Berlin flagship brand and coordinates the overall marketing strategy of the German capital  (recent example : the pop up lab Berlin). More than ever Berlin is mobilizing its efforts to position itself as "the place to be" for startupers.

Unburied treasure, leveraging a place’s hidden branding opportunities : this phrase coined by the iconoclast Jeremy Hildreth sums up well all the complexity but also relevance of place branding as an approach aimed at uncovering and leveraging, rather than merely « manufacturing », the distinctive assets, the "genius loci" of a place. Take the city of Edmonton, rather than opting for a costly advertising strategy, it has developed an offline and online place-makiing platform to engage the local civil society, encourage it to take risks, and "take their idea into reality", to deliver the new city’s rooted ambition "Make Something Edmonton". The director of Colliers International, gives a workshop on the link between place branding and place making (photo taken from the website www.citynationplace.com)

We can only regret that the quick pace of the conference, despite the numerous workshop sessions, did not always allow delegates to take a step back on the cases presented, to draw useful lessons for their practice. Then, the very expected intervention of Charles Landry, renowned speaker who coined the "creative city" concept, though very inspiring and instructive about the upheaval effect of digitalization on society and urban living, appeared somewhat disconnected from the rest. France and its territories, which normally have a lot to say on place marketing, shined again by their absence. That's unfortunate because French cases would have provided the opportunity to address the crucial issue of institutional transformations and its effects over place branding policies (merger of regions, new regional entities, brand reshaping etc.).

Still a young conference in the place branding game, City Nation Place has the full potential to establish itself as the world reference in the field (an edition is planned in 2017 in New York and then a second in London). 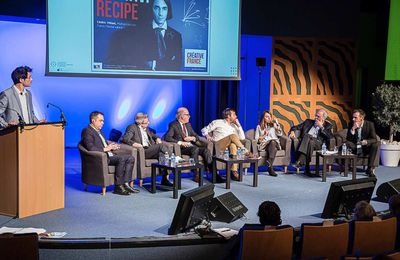 Send me a message to discuss your project today. I work with clients from all over mostly Massachusetts, Connecticut, Wordpress Design, Web Development in Boston, Logo Design, Connecticut Website Services, Logo Design and Branding Agency in New Yor

That's a great summary of the conference, thanks David!